Comments Off on Video Book Talk: The Poets Laureate Anthology

Old Glory: American War Poems from the Revolutionary War to the War on Terrorism, edited by Robert Hedin 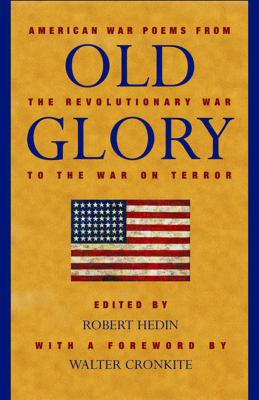 For National Poetry Month and Patriots’ Day: This collection of nearly 200 poems reflects on both past and modern wars, representing all types of poetry, various points of view, and a wide range of emotions: love of country, sacrifice, tragedy, and glory, as well as disillusionment and dissent.  Each poem is accompanied by a brief biographical note on the poet for context:  John Ciardi, for example, was a B-29 gunner and flew sixteen combat missions over Japan in World War II; Louise Bogan lost a brother in World War I.

Comments Off on Old Glory: American War Poems from the Revolutionary War to the War on Terrorism, edited by Robert Hedin

My Favorite Book: A Child’s Garden of Verses, by Robert Louis Stevenson

To pass the time and help a hospitalized speechless Alzheimer’s patient who had just suffered a stroke I read aloud poetry.  Several visits had passed without any communication from the patient, but during a reading of “Bed in Summer” from Robert Louis Stevenson’s Child’s Garden of Verses, without any prompting from me the patient recited the last few stanzas.   Who knows how many years had passed since she had read this poem!   That is the last time I heard the patient utter any complete sentences.   This memory makes the Child’s Garden of Verses my most unforgettable book.

Comments Off on My Favorite Book: A Child’s Garden of Verses, by Robert Louis Stevenson

Haiku is a form of poetry usually three lines long and a total of seventeen syllables.   With just a few words the images in these poems are stunning. It’s worth taking time out of your busy day to pick up this wonderful anthology.

Comments Off on Haiku: Poetry Ancient & Modern, an anthology compiled by Jackie Hardy